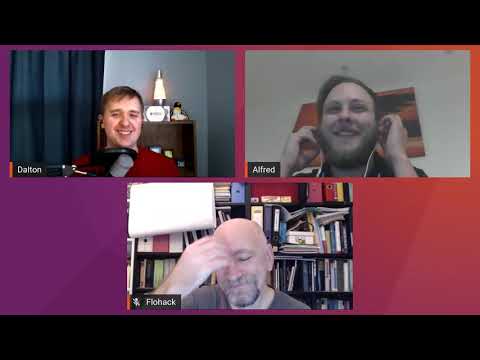 Looking for the Audio-only version

of the Q&A?  You're just one big orange

Get the Audio Version

Presenting were Dalton, Florian and Alfred.

If you have a device and want to know whether UT will run on it, head over to devices.ubuntu-touch.io to check the list. If it is not listed it would need to be ported, which is not a quick or straightforward process.

A PinePhone motherboard upgrade is now in the Pine64 store, now providing 3GB of RAM. You can get it now, subject to availability before 31 December. You will need your original PinePhone order number.

Dalton is giving a talk next Saturday at Linux App Summit 2020, on some of the things currently available to app developers on mobile Linux. Dalton will be discussing battery conservation, as part of his contribution
conf.linuxsummit.org November 12 to 14 from 08:00 to 20:00 UTC.

Florian discussed the F(x)tec Pro 1-X . It has a physical slide keyboard, a fully functional touch screen and comes with either Lineage or UT pre-installed. They did almost everything themselves, with little help from us. It has lots of storage, 8GB RAM and HDMI out, so it is a very convergent device. Pro1 already exists, so the makers have a track record of delivering.  It is available only through a limited Indiegogo campaign. A good replacement for a notebook maybe. It is quite expensive but great for those who can afford to get one.
OTA14 brings many fixes for Android 9 devices such as the F(x)tec Pro1x. There are camera improvements. We put the focus on Android 9 mainly because we wanted to be properly prepared for the upcoming Volla phone release. That device now has its own stable channel.

This time we only took 34 days between releases. We aim to be similarly fast from now on, having got some major engineering out of the way.

New to OTA15 will be some fixes for regressions brought about by the Qt upgrade.

UBPorts Installer 6.0  beta is out! It now has additions to automate the early stages of Xperia X install. In some circumstances it now downloads the binary for you. Retro486 did an amazing job on the modification of the installer for Xperia use.

The system for reporting status to the OpenCuts user test system is now live.  If you agree, it can report whether the installation worked or not and what platform and version you used.  Jan has done a great job on it. Xiaomi Redmi 4X is newly available from within the installer thanks to DanCT. The Z4 tablet from Sony is also there.

Support for new phones is difficult to do but we have three brand new devices now – PinePhone, Volla and Pro1X. Recent Android devices are more of a struggle. Florian proposed that if someone wants to supply him with a suitable phone, he will do some work on it.
Sponsors were thanked.

The News section of our Forum is the best place to post questions for the Q&A. YouTube live chat, Telegram and Matrix are other places to post a question.

If you didn't know, the Forum questions get priority.

McMarius11 asked whether we can have a blue light filter please? [We don’t usually respond to feature requests in the Q&A but this is a common question which we have discussed before.] Many people want it. Task priorities have probably been more of an issue than the technical challenge itself. We do want to finish the Mir and Wayland integration first though, so that doesn’t break our solution. We think it will end up being a low level Mir implementation, in the color controls.

Libremax noted that we are getting lots of exciting new things and wanted to know if that comes from a  logical planning structure or whether priorities are decided in some other way? There are weekly developer meet-ups to discuss what to do next. These are open to all but they have to be kept within practical limits, so please only ask to attend if you want to contribute something rather than just to observe. We use agile methodology. We listen to what is happening around the community and pick up ideas and concerns. Community requests will make a bigger impression when we have fewer of the large, ‘must do’ issues like the move to 16.04. Volla and Pine both dictated our priorities for a time, since we had to get ready for them. Now it is becoming easier to look at some of the issues which have had to take a back seat. Core apps are a different case than the system itself.  The maintainers are largely self motivated and manage their own progress. Camera, Messages, Weather etc. fall into that category.

Mediahub improvements to make remote media available directly in apps is an example of something driven by enthusiasm, with developers just getting involved.

Nekojet asks when Halium 7.1 will come to the established supported devices. We are now very close to that. One issue is how we present it to users. It would probably need an additional update channel named Halium? It would certainly need widespread testing before its full introduction. It will appear in the Updates part of Settings at some point for the OPO and Nexus 5. FP2 still has issues with it and needs some work. The option will also be in the installer.

Povoq asked whether the GSI could become standard issue for all our recent Android devices? It is a build of UT for Android with a library of drivers for many different devices built in. A downside of its use is that all the redundant modules take up a lot of space. So it adds around 200MB to the image. Overall though it brings so many benefits that we can live with that. Getting recovery to work is an ongoing challenge but once that is solved it could certainly become a generic solution.

In previous Q&A sessions we have discussed push notifications. Webpush in Morph is completely separate from the rest and is limited by the fact that the browser must be in focus at the time. Engineering it to work in the background would be quite complicated. Dalton will touch on this issue in his talk. At the moment there is a daemon that checks. UT is the only thing using that approach and it does not utilize the web browser notification mechanism. Using Webpush is our favored idea, covering the browser as well. A system wide solution would mean all relevant apps being altered too. We would need to join hands with another project to achieve Webpush integration. It is a major task and we would have to share the load with others. We might decide to rely on adapters. For example for Martix we used a gateway. The idea would be to change notifications from whatever source into a format that UT understands. All this is very far in the future though.

Notch support needs work, as does round edges. We need to look professional. To achieve the necessary changes we probably need to make modifications at display-server level.

Ari asked if there are any downsides to the GSI? As mentioned above, yes the increase in size is an issue but it is worth it.

Josele13 asked if the X4 file system is supported? Yes we use that everywhere. XFAT is a challenge because the Microsoft patent dispensation applies clearly to the Mainline kernel but it is not at all clear that there is permission for earlier kernels, which we mostly rely on. Incidentally, the format for SD cards used with UT is FAT32.

Ubuntutou asked if the ProX1 will use mainline kernel? No because it is an Android 9 implementation.

When will UT support Whatsapp? Well, Facebook could create a UT app for us – but that is vanishingly unlikely. They could open their API – also highly unlikely. The only real option is Anbox and that is not at all in a good state. We do want to get it working properly though and the good news is that we have a developer who is about to join us, specifically to work on Anbox. That doesn’t mean it will be fixed any time soon but at least we will make a start. ‘Working’ where Whatsapp is concerned means very basic message functionality, without push notifications, media etc. Very bare bones in other words. Whatsapp web via Morph is an option but it does requires that you are running an authorized app on a device somewhere simultaneously.

Luri asks if OTA numbering will change after we shift to 20.04.? Version naming is always a problem. The ‘OTA’ formula is getting tired and confusing. We could maybe use animal names? There are no specific plans to change but there would be no resistance to the idea of dumping the ‘OTA’ formula.